Slow Killer: How Vaping Destroys Your Lungs and Hurts Your Oral Health!

One of the major marketing strategies used by e-cigarette companies is implying that their product is safer than regular cigarettes. They claim the oil found in e-cigarettes does not use smoke and is cleaner hence pose no health risk.

The truth, however, is extensive research has not been done on e-cigarettes. Consumers are aware of potential risks but do not know the full extent of those risks.

What the research says

A lot of studies have gone into showing the effects vaping has on our lungs and on people with COPD (Chronic Obstructive Pulmonary Disease), which roughly affects thirty million people in the United States.

A 2016 study found that vaping products that contain nicotine trigger lung tissue damage and lung inflammation. In 2017, results of a research published in the American Journal of Respiratory and Critical Care Medicine discovered proteins that contribute to COPD in e-cigarette smokers’ airways.

According to results from research carried out at the University of North Carolina, School of Medicine, e-cigarettes can lead to similar suppression of immune genes in the respiratory system as regular cigarettes, implying e-cigarettes could be just as harmful.
From 2018 onwards, the U.S Food and Drug Administration requires warning signs on vaping products that have nicotine and tobacco.

While most research has been centered around the possible effects vaping has on lungs, what most people do not know is that vaping can also harm your oral health as well!

Even though e-cigarettes do not lead to the same effects as regular cigarettes such as tooth discoloration, inhalation of nicotine is still harmful. Nicotine affects your mouth’s ability to fight bacteria because it reduces blood flow. This can lead to a gum infection known as periodontal disease.

What’s more troubling is that the signs and symptoms of gum disease can be made more challenging to identify. When gum disease occurs, your gums tend to get inflamed due to the increased blood flow. However, nicotine reduces blood flow in your veins; this makes the diagnosis of gum disease much harder. 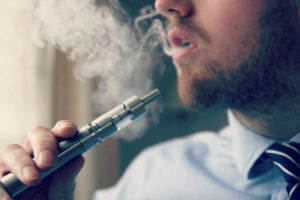 Without early detection, periodontal disease can become more dangerous. Also, when the amount of blood in your veins is reduced, gums cannot get the needed oxygen and nutrients. It primarily causes gum recession by choking the tissues from the blood necessary for them to survive.

The nicotine can also make the muscles found in the jaw to become stimulated which causes teeth grinding or bruxism. With or without nicotine, the first impact of vaping is the drying of the mouth; this is because of the e-cigarette base liquids like propylene glycol. Saliva is vital in breaking down food particles and preventing the buildup of harmful bacteria. A dry mouth removes this protection and allows the build-up of excess bacteria which in turn can lead to tooth decay, gum diseases, and cavities.

Mouth dryness can as well lead to bad breath and mouth sores. While chewing gum and brushing teeth can help stave off the bad breath, it is still not a permanent solution because the root problem is not being addressed.

A 2018 study of cells from human gums found that the vaping aerosols increased DNA damage. The cells were found to lose their power to divide and grow which lead to the speeding up of cell aging and resulted in the death of the cells.

The death of cells impacts oral health issues like periodontal diseases, bone and tooth loss, bad breath and many more. More extensive research needs to be done to fully comprehend the full extent of the effects vaping has on our health. To avoid the potential unknown risks vaping poses, we always recommend that it’s safer to stop smoking entirely. Contact North Boulder Dental Group and learn about oral health.